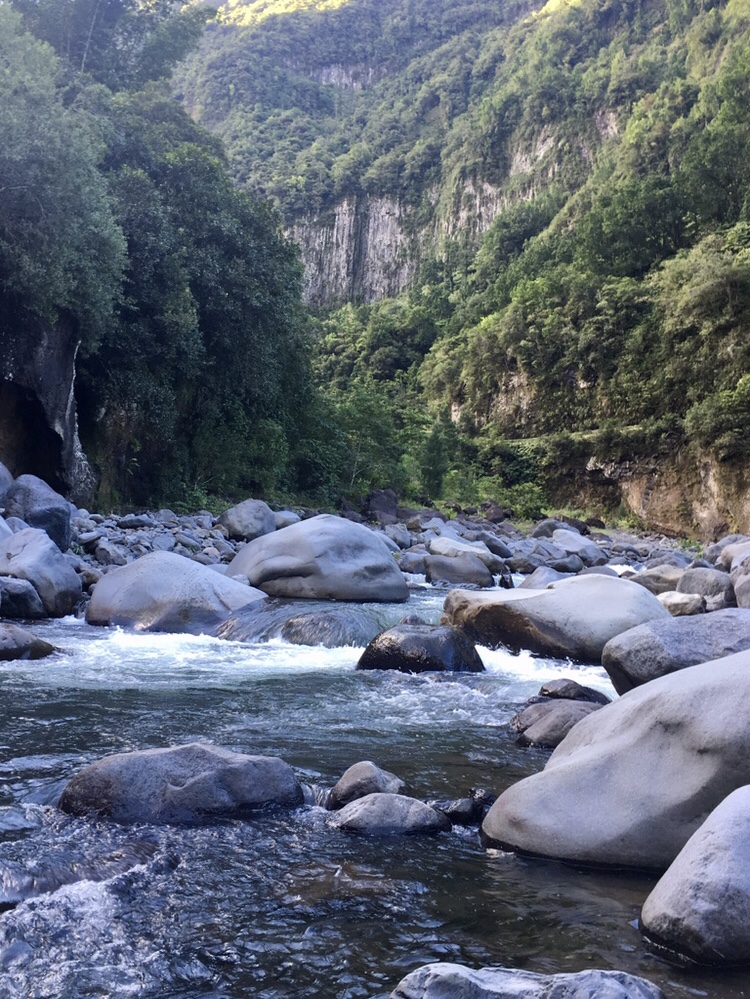 Small tour in the north of Reunion Island

Today I'm going to talk about a walk on the north coast of the island.

This coast is very often sprinkled by a fine rain. Here we say …. "ça farine" !!!!, and so the forest is lush, very green, with ferns, beautiful trees and of course rivers, waterfalls and pools where it is good to swim. The air is refreshing, we are about 400 m above sea level.

The place is called "Bassin Bœuf", at the exit of St Denis la Capitale and Ste Marie, you have to exit at Ste Suzanne, then follow Bagatelle. A small road winds up to the forest where we can park the car in the shade and already we hear the river "Ste Suzanne" and the beautiful waterfall of crystal clear water singing in concert with the birds.

After having bypassed the pool by the top of the forest, and crossed the river on the lookout, we enter a dense, humid, luxuriant vegetation to finally discover the natural pool and its waterfall. A very green grass welcomes us to put our towel and picnic; but first we have to take a dip in this fresh, but very pleasant water. We can see in the sky, the Papangue, the only bird of prey present on the island which can have a wingspan of 3 m and more, the Pailles en Queues and their very specific calls and other singers such as the white bird, the cardinal, the ti-serin or ram.

On the way back, we stop at Ste Suzanne to visit the only lighthouse in Reunion, "Bel Air", 20 metres high, 73 steps, this lighthouse was built to signal two rocks in the sea called the Cousin and Marianne.

Then we go to see the "Niagara" waterfall with its huge basin surrounded by crops, sugar cane in the valley, bananas and coconut trees on the heights. There are ravenales, also called the traveller's tree because at the base of the trunk it is enough to make a hole to drink from it and the banyan tree also called the perpetual one because its roots fall from the branches to come and take root and so on.

We drove back home with the sunset on the mythical road of the seaside on one side and the cliff on the other. It is often cut off during heavy rains and rough seas because it becomes very dangerous.

See you soon to discover another part of this intense island.