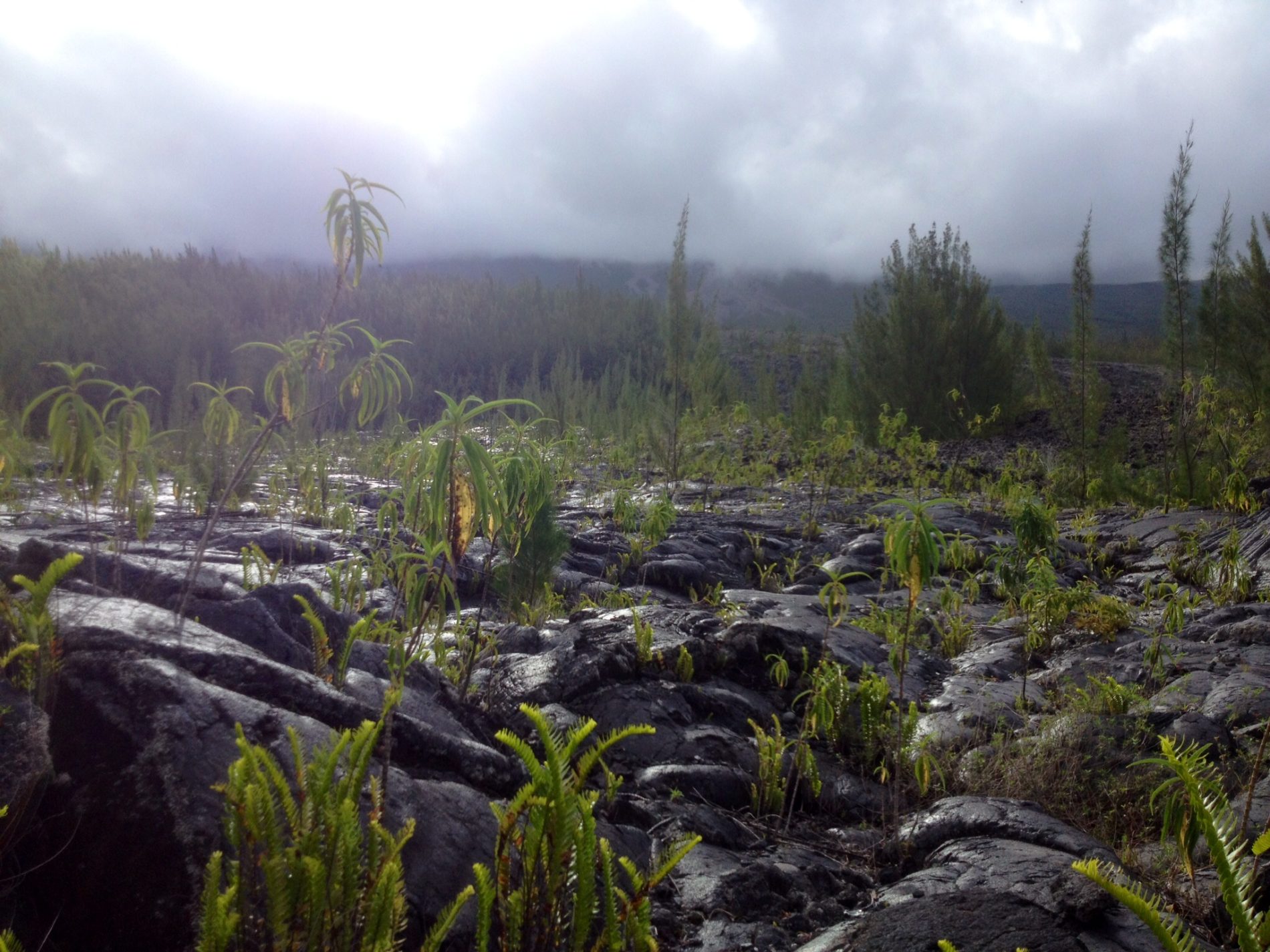 Birth of an island... The Reunion

So here we go to tell you about the birth of this intense and grandiose island.

It all started more than 3 million years ago. There was the first eruption. According to the writings that I was able to find, the volcano was called the Volcan des Alizés, and then very shortly afterwards, there was a second eruption a few kilometres from the first. The Piton des Neiges emerged 4500 m from the depths of the Indian Ocean. The Piton is located at a hot spot on the planet, in the middle of the African plate. Over millions of years the two volcanoes erupted intensely, and gradually moved out to sea and closer together. There were huge scree slopes, gullies 900 m high, water gushed out to dig further and shape the relief and give birth to a single island.

The first vegetation to appear was the lichen. It has no stems, leaves or roots, yet it clings to the lava. When they die, they leave behind organic debris that feeds the ferns. Then seeds brought by the wind, in the stomachs of birds, sea currents and cyclones, fly through the warm air and take root on the island's soil. Flowers, shrubs and then trees adapt to this new wild ecosystem.

There are an estimated 160 species of plants and flowers endemic to Reunion, which is unique in the world. Thus, 60% of the island's indigenous flora is made up of plants that only exist in Reunion or in the other Mascarene islands. The maintenance of biodiversity makes it one of the best preserved islands in the world.

The first inhabitants were landed on the island from Madagascar, after the mutiny at Fort Dauphin. Seven mutineers were sent to the island as punishment. After a few years, these men were found to be in extraordinary physical shape: their "prison" turned out to be a paradise, this was in 1648.

Access to the island is very difficult, only one place offers shelter: St Paul. The East and North coasts, facing the wind, where the volcanic rock falls steeply into the sea, offer no shelter for boats. The South with the volcano which "spits fire" is not more reassuring, only the West remains a potential access but it is necessary to pass the coral barrier.

Then the vegetation is very dense, almost impenetrable, with the immense and virgin cirques such as Mafate, Cilaos and Salasie classified as UNESCO heritage sites. These three cirques have very deep ravines where rivers flow in gigantic waterfalls of 300 m and more. The crystal clear water meanders through lush vegetation, with the Piton des Neiges volcano at the centre. The island therefore remained wild for a long time. Between 1665 and 1671, the population grew from 12 to 100.

At the end of the 18th century, the "Bourbon" island of the time had 297 women out of a total of 734 inhabitants. On 19 March 1793, Bourbon Island changed its name to Reunion Island by decree of the National Convention.

Since that time, the island has changed a lot. The slaves fled to the hills and began to clear plots of land, build Creole huts, plant sugar cane, corn and bananas …. They were called "Maroons" and the island gradually became populated. Malagasy, Indians, Africans, Portuguese, Italians, French, …. Reunion is a very mixed island, which makes it a happy, smiling, peaceful island, very rich in know-how, a small paradise where life is good.

See you soon for a discovery of the island and its good smells.